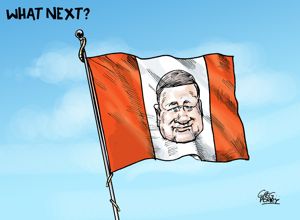 I say we give Harper a break of “innocent until proven guilty.” Yeah, yeah pick yourselves up off the floor, stop gasping for air and let’s look at this with some logic over the Robocalls scandal, shall we?
Now, what happens if you are suspected of an illegal act on your job?
Your boss suspends you until the investigation is completed.

Now, the citizens of Canada are Stephen Harper’s boss, which is what democracy is supposed to be, right? In that case, we should be able to suspend him without pay until the investigation is completed. If he’s innocent, we apologize [because Canadians are so good at it] and give him his back pay with a settlement. If found guilty–out he goes, forever, hopefully to spend part of his “forever” behind bars so other politicians won’t be tempted to play the same game.

If Harper really cared about Robocalls or the country he’s attempting to govern, he’d step down for the moment. Why? Because if the charges didn’t stick, the man would be truly Teflon, forever. Nobody would believe any opposition who said otherwise.

Too bad he’s not as smart as he thinks he is or he’d play us for suckers on it. Either that or he may well be guilty of knowing exactly what went on under his banner. Or it could be any combination of circumstances.

But whatever it is, it sure smells like he doesn’t want us to know about it.